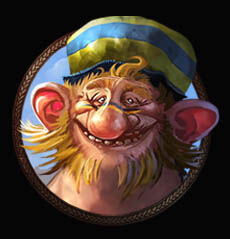 Nobody can say from were this doltish troll has come. Yet some time after the hordes of the Anderworld declared war on humankind, he surfaced in the places where people live. Clearly he's taken a great fancy to them and is interested in their customs and habits.

Gnob appears to have more humor, if not greater intelligence, then his brethren. Yet even more than other fey beings, this little meanie enjoys mimicking humans and playing tricks on them

Although many heroes claim to have struck down this little troll nicknamed the "Ghastly Gnob," reports nevertheless continue to pour in from people who have seen him. He might have pilfered a gift box full of chocolates, or mixed in painted dragon eggs at a children's egg hunt, or even disguised himself as a merchant - Gnob is always good for a surprise.

Different items sold at each arrival. This list represents all past sales with the most recent prices. Items are traded for the event curency, Drakens:

Gnob can be found every few months in Kingshill, selling his special items.
Alternatively you can visit him in Gnob's Cave using a

Directions to Gnob's Cave.
In Gnob's Cave he sells ONLY the items he sold during his last visit in Kingshill.
Gnob is now permanently stationed in Kingshill, but he will have special offers from time to time.

Community content is available under CC-BY-SA unless otherwise noted.