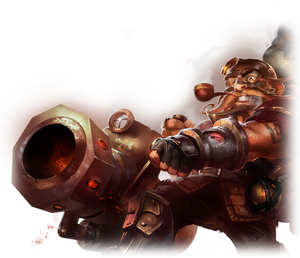 Steam Mechanica are masters at mid-range combat because of their unbeatable fire power. Their shots are rapid and forceful; they can assemble weapons at the drop of a hat; and they can mobilize quickly using their fire and steam-powered contraptions. They're also not afraid to use grenades and tanks. Basically, you don't want to be on their bad side!

If there's one thing Dwarves know like the backs of their worn hands, it's their mechanical inventions. In fact, some of the most celebrated inventors are Dwarves. It's said they can fashion things like guns with nothing more than a few screws and pipes.

As far back as history can recall, Dwarves have lived secluded from man, deep within the mountains. Since the return of their time-old foe, the Dragon, the Dwarves have emerged to search for allies.

The Guild of Master Technicians has long since been feared in battle because of their impressive weapons. Their artillery is so remarkable because of it's steam-power. Leave it to Dwarves to harness the power of steam! The only downside to Dwarven inventions is they are difficult to maneuver and they tend to malfunction at inconvenient times. When they aren't blowing something up, Dwarves are usually cutting up and having a good time.

Retrieved from "https://drakensangonline.fandom.com/wiki/Steam_Mechanicus?oldid=151541"
Community content is available under CC-BY-SA unless otherwise noted.