THIS IS THE OLD EVENT, FOR THE NEWER VERSION CLICK HERE

The New Moon arouses the activity of Karabossa. Travel to Blackborg during the event to prevent the ritual sacrifice of the virgin to the Fairy Queen and defeat Karabossa once and for all.This repeatable event will reoccur every new moon (with approximate starting dates listed below). During the rest of the month, Blackborg will be available for general farming of

Note: These are the real-life new moon phases, in-game dates for the event may be different.

Realm Path to Blackborg and complete the quest Blackborg. In addition, Blackborg portals can be purchased from Thabo or your Trader:

. Groups of up to 5 may enter together. Monster level will scale to the highest level player in the team, and difficulty scaled to the number of team members.

The Day or Night map will be accessed -- depending on the event status. 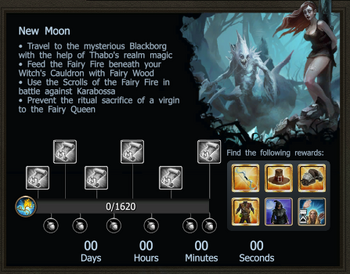 Fuel the Witch's Cauldron with Fairy Wood to receive Fairy Fire. Collect Fairy Fire to earn drakens and a chance to defeat Karabossa. 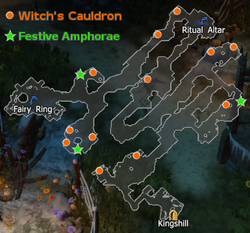 Collect Fairy Fire from the 12 Witch Cauldrons dispursed around each map.

Hold your ground: defend the virgin

Collect the quest Eternal Youth and head to the Ritual Altar to defend the Virgin from 6 Waves of monsters. Defeat Karabossa's Ice Fairy Minion during the last wave and all players in the group will receive a Fairy Power buff for 60 minutes. This buff will be necessary to defeat Karabossa.

Summon the Fairy Queen Karabossa, by activating Malyssa's Magical Scroll at the Fairy Ring. All players facing Karabossa must have the buff Fairy Power attained from successfully defending the virgin. Otherwise, Karabossa will be immune from attacks. 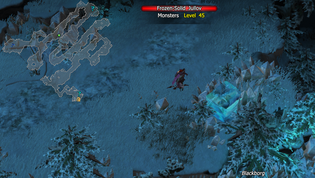 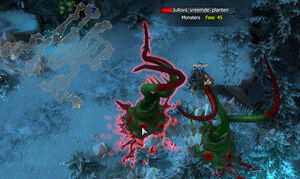 Occassionally, find Jullov and his housekeepers in Blackborg and defeat to receive

Fairy Fire. After breaking through the Frozen Solid Jullov, encounter members of his housekeeping staff, such as:

Items from the Witch Chaser Armor set and Weapon can be dropped by Karabossa during the event. Items will scale to player level (20-50).

Karabossa drops level 40 & 45 unique items with stats at or below the Maximum values. The Wiki will only list the maximum possible values; actual enchantments may be lower. A Witch Hunter Gear set bonus is available for the Helmet, Pauldrons, and Armor items.

Retrieved from "https://drakensangonline.fandom.com/wiki/New_Moon(old)?oldid=103081"
Community content is available under CC-BY-SA unless otherwise noted.