"Achieve ultimate power or cower in the shadows of the old order – no matter what, SHE shall always be your ruler."

As a young sorceress, Khalys secretly taught herself the ancient dark arts. When she was to be punished for her transgressions, a member of the Nefertari cult came to her and helped her escape by offering refuge within the cult. Within a short time, she amassed power and ascended through the ranks to become high priestess.

As the cult's high priestess, Khalys will stop at nothing to establish Nefertari as Duria's main religion. Anyone seeking opportunity is openly accepted into the cult whereas those who value old traditions are actively condemned and spiritually enslaved.

Those strong enough to openly confront Khalys are soon exposed to her true colors and see a deceitful, contemptuous power-monger whose body has fallen victim to the harmful powers of Andermagic, becoming horribly disfigured. Vipers adorn her pale throat and her hands have been transformed into grotesque claws, which she now uses to cast spells to extinguish the lives of even the strongest of Spellweavers.

Teleport: Khalys teleports to a random location in one of the 8 corners (purple arrows) or to the center of the arena.

Slash: Khalys performs a melee swing with a clawed hand, dealing damage to players within the arch of her attack. (physical)

Andermagic Flood: Khalys channels a wave of energy that covers almost the entire field, while healing herself for 10 seconds. (andermagic) 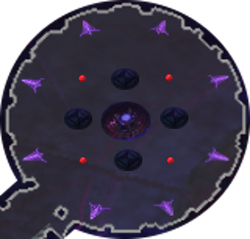 Like all other Unique bosses, Khalys is immune to all stuns and other debilitating skills.

Recommended groups include at least 1 dragonknight to engage Khalys in melee range and prevent her from attacking the other players in the room. Khalys' attacks cause high levels of damage, so if the "tank" has difficulty maintaining hitpoints for this entire 30 seconds phase, a spellweaver's Watchman (with Mighty Guardian talent) or a well equipped ranger (with his/her Wolf pack) may step in to temporarily relieve the group's tanking player. All other ranged players should attack with their high DPS skills.

As Khalys teleports to the center of the arena, players should quickly head to one of the four circular safety seals; players may also head out of the circular arena and into the immediate hallway. Khalys will be vulnerable during this 5 second transition, so ranged attackers can continue attacking during this brief time.

Khalys, then, casts her global attack, which charges her circular arena with a strong andermagic wave. While channeling this attack, Khalys is immune to damage and will also regain some health. As she completes this charge, players can start directing their attacks toward her central location again; these attacks redirect toward her new destination as she teleports to another random corner of her room.

Four powerful healing orbs are located within the arena; try to save the healing orbs for those that find themselves in need of Health.