"He was as big as three men and his rage was as glistening as the sun, his punch as forceful as a hurricane." 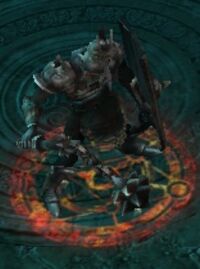 Heredur was once a grand imperial military leader who ultimately had himself crowned as the first king of the Duria empire. For over 600 years his body has lain in a sarcophagus in the Crypt of Kings at Kingshill, with a stone-carved likeness of him holding his sword Scapanor in his hands.

Yet the heinous minions of the accursed Nefertari have infiltrated the crypt below the city, stolen Heredur's sword and begun resurrecting the great warriors of ages past into a new, unholy life in the catacombs. Through their actions, even the old king has resurfaced in order to focus his rage against anyone whose presence disturbs the peace of the dead.

The former monarch has risen larger-than-life in his battle armor, attacking any hero daring to enter the desecrated crypt. Heredur swings a gigantic morning star with such fiery rage that for many opponents a single strike is already the end.

Use Lightning Strike when Heredur stands still. You can also hit-and-run by using Fireball. Be careful not to get hit though, because his attacks can take out most Spellweavers around level 19.

The best way to deal with Heredur is to keep out of reach of melee attacks. Use a hit-and-run method: mark, then fire with precision shot.

The easiest way to defeat Heredur is to clear the enemies in the surrounding area, then approach him. Lead him to the doorway of the northern room or southern room (these are the rooms with a series of pillars) and he will get stuck. Now you can easily attack him without getting in range of his melee attacks. You will still have to dodge his Mighty Swing attacks, which can be easily recognized and avoided because of the animation.

Dragonknights will have the toughest time against Heredur because of a lack of ranged attacks. Stuns are ineffective against Heredur. Low level Dragonknights are unlikely able to "tank" attacks from Heredur. Run in circles around Heredur and strike, swing, or jump to build rage and slowly chip away at his health.

Community content is available under CC-BY-SA unless otherwise noted.