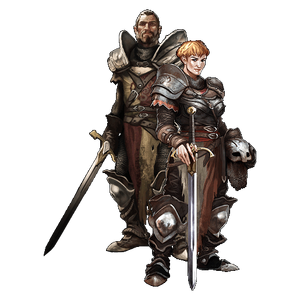 Dragonknights are highly skilled in melee combat, and are capable of channeling their pent-up anger to invoke special skills and make powerful attacks. That's why the longer they stay in battle, the more dangerous they become!

An impressive array of deadly weapons serve an equally deadly line of warriors. Using much more than brute force, the Dragonknights are the fearless freedom fighters of Duria.

Each recruit, assuming they survive their training, must undergo the Order's blood-initiation ritual. Within the halls of the Dragonknight stronghold, they drink the centuries-old dragon blood. They then continue their studies, learning how to use the fire and rage of the dragon within them to master the feared fighting techniques of the Dragonknights.

Once known as the fighting elite of the empire before its fall, they are now barely more than mercenaries. But the Dragonmaster, Head of the Dragonknight Order, has commanded his Dragonslayers to mobilize all Dragonknights for battle. Faced again with the threat of the ancient enemy, the Order will be pushed to rise to the challenge.

Dragonknights' specialty is defense. They are able to take much more damage from enemies than other classes, and that's crucial, since they must get into melee range of the enemy to deal damage. In a group, Dragonknights have the tank role. They absorb high levels of damage, while allowing fellow group member to deal their damage.

Dragonknights start with zero rage. Rage is filled up by using basic abilities that grant Rage points or by taking damage from enemies. When no hits or damage is taken for 6 seconds, rage will auto-deplete 5 points per second.

Retrieved from "https://drakensangonline.fandom.com/wiki/Dragonknight?oldid=167336"
Community content is available under CC-BY-SA unless otherwise noted.