While the game can be played in Internet Explorer 11 browser, it can be also played in the native Thin Client.
Check Technical Info for minimum system requirements and troubleshooting.

The game can be played both on Windows OS and MacOS.
However, starting with R224 the dev team announced they are no longer working on updating the MacOS Client. The new MacOS version will no longer support the client so that means MacOS users can only play the game on older MacOS versions (knowing Apple and how they are forcing people to use their latest features it would be almost impossible to play on MacOS).
That leaves the Windows Client only possible option.
The game is not supported on Linux OS, but many Linux users were playing the game on Wine. We hope DSO devs will create Linux based client, knowing Linux is the future for operating systems and probably gaming.

You can run 32bit game version via Internet Explorer 11 or by launching the DSO Client.
By default the game is running in 32bit version.
In order to start the 64bit Client version you need to do the following: 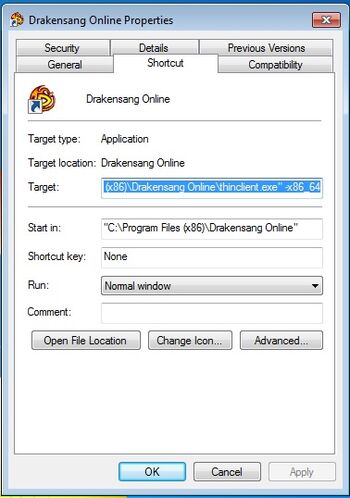 If you want to play on Test Server in 64bit DSO Client you need to follow the same steps as those mentioned above but you will need to add the following at the end of the line " -stable -x86_64" (there is 2x space on the start and after "stable"). 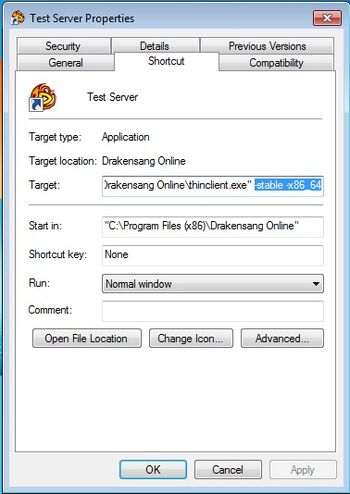 Retrieved from "https://drakensangonline.fandom.com/wiki/DSO_Client?oldid=169510"
Community content is available under CC-BY-SA unless otherwise noted.