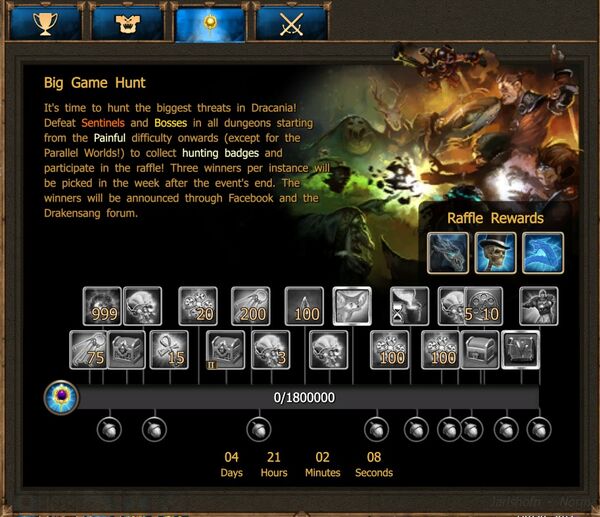 
Once you defeat a Boss or a Sentinel you get

Hunting Badges. You will find them in all Scaling Normal Dungeons starting from dungeons in the region of Slifmoor and finishing with the dungeons in the Qaizah region.
World Bosses are dropping more badges than the Sentinels BUT there is a 10% chance that a Greedy Goblin will spawn instead of a Sentinel. The Greedy Goblin has a higher drop than Sentinels (explained below in the drop list section).

In order to access the Scaling Dungeons you have to fulfill both the level and quest requirements. Read about it in THIS page.

Preparation for the event

In order to enter Boss dungeon you need to have

However, even if you need

Every time you pick up

Hunting Badges you get

Hunting Badge stack size. This buff can stack up to 100 times. That means you can get up to 1000% more badges per

Hunting Badge stack.
In example, if the

Hunter's Fortune Buff is running in game time not in real time. Whenever you logoff or switch character it stops running. You can resume playing later and the buff will continue to run where it stopped. If you leave the game when your buff has 10 minutes to go ... it continues from 10 minutes when you log in next time.


Note: At some point there will be another buff of 50-500%.
This buff is permanent and it works independently of the aforementioned buff. So you can have max buff of 1050-1500% more to the stack size.

Note 1: The floor wardens at Deeps of Demise are dropping

Key of Prowess but they are not good for farming.
Note 2: Sentinels inside Secret Lairs are dropping

Hunting Badges, but you better avoid them.
Note 3: Sentinels inside Secret Lairs are not dropping

Note: The drop list for Greedy Goblin may not be accurate since I have come to these numbers through calculations out of very few drops.
According to those few drops the Greedy Goblin is dropping 2 stacks of


Few Tips:
If you are lower level, Loxley Caverns or Foxarrific Burrow of Investigation HQ are the way to go.
Don't forget you have to be at least level 20 to play the dungeons on Painful plus the additional level requirement per dungeon
If you are level 50-55, Khepre is the best for farming

Key of Prowess and

Hunting Badges in same time.
If you have enough

Key of Prowess just pick one of the bosses.